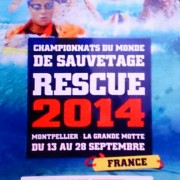 Club members Pete Gaisford, Simon Lawrence and Andrew ‘Milky’ Byatt have arrived in sunny Montpellier, France representing Perranporth. SLSC at the International Lifesaving World Championships, Rescue 2014. Today’s pre Masters event training went well culminating in a lazy french lunch whilst discussing team tactics. El President Gaisford was horrified to find that the threesome will be in the 140+ team events and not with more mature competitors. Grumbling he would need a quick start to keep up with the young guns, he retired to bed early to preserve his energy. Wardrobe master Lawrence has come up with a selection of French themed team kit which Chief supporter Holly Byatt thought dashing. The team are still mystified as to the whereabouts of Doreen who has according to the Newquay crew arrived to officiate and been seen cycling up and down the promenade of La Grand Motte like a wild thing avoiding the intermittent lightening storms. Spike meanwhile is eating her weight in l’escargots. Club Surfboats crews and the younger whippersnappers Andrew has rounded up will be arriving as the week unfolds to compete in World Surfboats and Interclub events. More tomorrow. Bonne Nuit