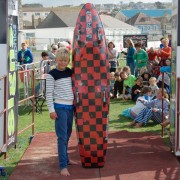 It’s been a couple of weeks since the Youth Challenge Aquathon but we wanted to let folks know that the club prize – a fantastic new Nipper Board kindly donated by Scott Wood from Aquasport International of Newquay was won by Newquay Surf Lifesaving Club.

We awarded points based on the top five performances – both M and F – across the two main race categories so that 1st place was awarded 25 points, 2nd place 20 points down to 5th place etc. Newquay and Perranporth tied on 120 points but as confirmed later, Newquay won more golds than Perranporth so the prize went to their team.

(The confusion was caused as our race times had entries from some folks who had not entered the club name associated with their child). Full results can be found here.

Thanks again to Woody for donating a great prize – and well done Newquay SLSC!