Early this summer, Club ski paddler Martin Fleet took on the challengeof the Celtic Crossing race from St Mary’s in the Isles of Scilly across some of the most treacherous water in the world back to Sennen Cove, Cornwall. Here is Martin’s account of the race.

“The paddle was amazing, it started with the race safety briefingthe night before detailing procedures and navigation to Sennen. We met early at the Scillonian in Penzance on the morning of the crossing where the Ocean skis were loaded on. All competitors were on the Scillonian together which was a great build up seeing everyone’s nerves, especially mine!
The ferry over to St Mary’s was rough with a large majority of the passengers feeling quite ill on the way over including my doubles partner. We were quite nervous seeing the 2.5 to 3m swells as we approached open water and looking back for land marks. On arrival at Hugh Town in St. Mary’s we set up the skis and set off on a staggered start, the singles and girls double first, followed by the doubles. Unfortunately Simon Lawrence injured himself at work the week before so a friend Willam very kindly offered to paddle the double back to Sennen with me.
Paddling out of the harbour at Hugh Town, St Mary’s and round the islands the weather was stunning with the Islands sandy beaches and crystal blue water looked very inviting. It took a while to clear land and we were then out in open ocean with the swells lifting the boat as they passed though. I was expecting to be riding runners the whole was back to Sennen but the condition were really challenging, lots of chop, cross swell from the channel proved a very demanding paddle.
After an hour and a half we were in no sight of land which was a unique experience in a ski but we were soon accompanied by some Dolphins who joined us for a while, every time we saw Dolphins it up lifted our spirits! Next was the shipping lanes to cross which had absolutely huge container ships motoring at 20 knots, we’d been advised to aim for the stern and soon passed through.
By now a distant haze of land was visible and we pulled alongside one of the single skis for some moral. The miles passed and we ate either food/ drinks/ energy gel every 20 minutes to keep fueled up. More Dolphins joined us as land every so slowly grew closer. At 4 hours we were feeling good and with Sennen clear in sight we could make out the large red lifeboat doors but it appeared that we’d been swept north by the currents more than we’d hoped and it turned into a slog… the big red doors wouldn’t get any closer.
It felt like forever, I think we lapsed on fueling as we thought we were nearly there and as we entered the Bay more Dolphins greeted us again which gave us the lift for the final push………Coming round the harbour I could see our family and friends on the shore and my lads ran into the water for a hug, very emotional. Then followed Pete Gaisford with a glass of bubbly!

We raised over £1200 towards “The Cove” – a new Macmillan cancer support centre at the Royal Cornwall Hospital. Thanks to everyone who donated to help. It was an awesome experience, a great challenge and I’d definitely recommend it to anyone! Many thanks to Anita my wife who supported me during my training since the new year, and Glen Eldridge and his team from Oceansports in Carbis Bay who set up and ran a great event! ” 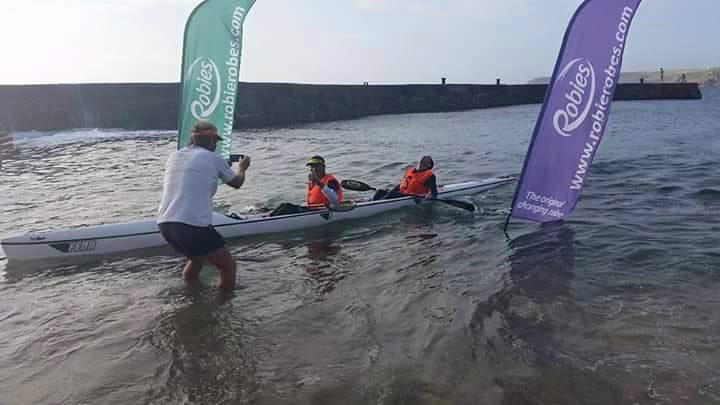